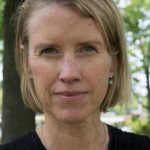 Lili Wright worked as a newspaper reporter for ten years before earning her MFA in nonfiction writing from Columbia University. She is author of the travel memoir, Learning to Float (Broadway, 2002.) Her essays have appeared in The New York Times, Newsweek, Down East, The Cincinnati Review, The Normal School, Cream City Review, and many other literary journals. Her work was noted for distinction in Best American Essays 2010 and Best American Nonrequired Reading 2010. Her first novel, Dancing with the Tiger, a literary thriller set in Mexico, was published by Putnam Penguin in 2016.