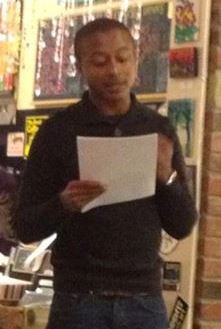 Those of you who don’t know poet Doug Manuel must be recent additions to our program, because when he was a student, even if it was in some minute way, he touched damn near everybody. Doug was an almost irreplaceable part of the Writing in the Schools program; when I spoke to the kids last month, they were still quoting him. In his voice. Their impressions were impeccable. Doug was also Managing Editor of Booth, and a big reason why our poetry game stepped it up these past few years. And now he’s enrolled in the Ph.D. creative writing program at the University of Southern California, no doubt entrenched in page upon page of theory and poem alike. Despite this, he was gracious enough to take some time to share with us how he writes. And this is how it goes:

No matter how much literary theory I learn, I still believe a poem is a type of prayer, something sacred, something to be taken seriously, and something that demands care and attention. No matter how many times I read about the fragmented self, I still believe that the “I” is the best vehicle to communicate something to “you,” the reader. No matter how many times I learn about the center being unreachable, about notion of telos being outdated, about language being a broken down vehicle for our thoughts, I will still believe, as Paul Celan did, that a poem should be a handshake; and for my purposes, I want that handshake to communicate warmly, to be firm but inviting, to be an embrace that leads the reader to look me in the eye, and hopefully we’ll end up having a conversation, perhaps over beers.

Ted Hughes thought of the poet as a type of shaman, and I also carry that conviction. It implies something revelatory and spiritual about the process of writing and reading poetry. I don’t go to Mass anymore, but I still pray. I hate admitting it, but I do. If asked about my religious affiliation, I usually call myself an atheist and feel badly later for saying so. I tell you all this just to say that I believe something mystical—maybe call it phenomenological—happens whenever someone sits down to write a poem, whenever someone reads a poem and feels some resonance, whenever people communicate at all and something is understood. Sacred, precious, powerful: all these words seem to fit these processes and moments I’m describing. I’m sure anyone reading this now at least has some inkling of what I’m trying to say here.

Carrying these tenets makes me not want to know too much about my writing process. For me, knowing is the enemy. I have hunches—sometimes I have lines or images that I want to begin or end with, but I don’t want to know what my poem will be about or how I’m going to write it. I have faith in the process of sitting in front of a blank screen and talking to that white space. Some days, I talk to it for hours to no avail; some days only scaffolding arrives; some days I crank out five poems. Risk and chance are surely involved, and I suppose to do this thing called writing at all, one has to have some type of faith, some type of belief in one’s self or the art. If not, why do it? If not, why sit in front of a blank page when you could be on a scenic bike ride or watching football or eating red velvet cake—why torment yourself? Why care?

I care about talking to you. I care about talking to me. I care about words, no matter how imprecise they are when it comes to clothing our thoughts and feelings. That’s why I try, and I want you to care too. So I keep trying, hoping that something I write means something to you, hoping to meet you somewhere, shake your hand, and see that look in your eyes that only connection gives, hoping that you hear my prayers, and that hopefully they were never mine at all, but instead that they were yours too, that they were ours.