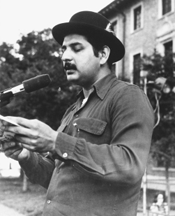 Puerto Rican poet Victor Hernández Cruz has made a habit of being ahead of his time.

At age 17, Cruz self-published his first book of poetry (Papo Got His Gun) on a mimeograph machine — well before the internet made book-minting something anyone can accomplish with a few clicks.

At age 18, he eschewed his senior year of high school to co-found a collective of writers and actors in Harlem and assume an editor position with Umbra magazine, still remembered today as a literary beacon for the Black Arts Movement.

At age 20, he became the first Hispanic author published by a major printing house when Random House released his collection Snaps in 1969.

At age 32, he was named one of America’s greatest poets by Life Magazine.

At the risk of continuing on and leaving every writer reading this feeling inadequate (or at least jealous), I’ll note only one more of Cruz’s firsts: that he will be the first up during Butler’s Vivian S. Delbrook Visiting Writers Series for the spring semester–7:30 p.m. Tuesday, Jan. 28, at the Eidson-Duckwall Recital Hall.

Cruz once dubbed his verse “linguistic stereo,” referencing his inclusion of both English and Spanish phrases in his poetry. But don’t confuse this for butchered Spanglish. The poet deftly fuses dual languages to trumpet a new American music, taking cues from Octavio Paz and Tito Puente alike.

In his 1991 poem “Problems with Hurricanes,” Cruz muses on the true fear of campesinos before the storm hits, a phobia that poetically echoes Lorca’s famous “New York (Office and Denunciation)” — “This is not hell, but the street / Not death, but the fruit stand.” Cruz puts a new spin on the adage by adding heavy winds to the equation:

Death by drowning has honor
If the wind picked you up
and slammed you
Against a mountain boulder
This would not carry shame
But
to suffer a mango smashing
Your skull
or a plantain hitting your
Temple at 70 miles per hour
is the ultimate disgrace.

Cruz’s tragicomic rhapsodizing eventually dies down, and he is left with merely one nugget of profound advice for the world: that we should quit fretting over acts of God, and should instead “beware of mangoes / And all such beautiful / sweet things.”

So don’t fear the polar vortex that could bring us snow or subzero temps during Cruz’s visit (note: I am not a meteorologist and in fact have no idea about the five-day forecast). And to reassure those firmly in Cruz’s camp, fresh produce will not be served.

Without any valid excuses, you only risk shame by staying home. 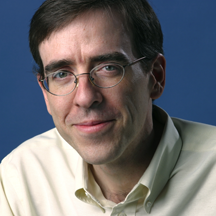 Ron Charles, fiction editor of The Washington Post, will jolt the Conversations@ Efroymson series out of hibernation with a discussion about the future of books and literary criticism at 7:30 p.m. Wednesday, Jan. 22, at our well-insulated MFA home.

The St. Louis native will be returning to the Midwest where he spent a dozen years as an instructor of American literature and critical theory before settling into a career in journalism. After serving as a staff critic at The Christian Science Monitor, Charles started his luminous stint at the Post in 2005, becoming one of the preeminent voices in the fiction world while racking up industry accolades like the 2008 National Book Critics Circle Award Nona Balakian Citation for book reviews and the top prize for A&E coverage from the Society for Features Journalism in 2011.

In his recent review of E.L. Doctorow’s Andrew’s Brain, Charles displays his trademark wit and his capacity to pen reviews that speak to casual readers and academics alike, sparing his audience from ambiguity and pretension, even when he is not so fortunate:

Early in the book he [the protagonist] says, “I don’t know what I’m doing here,” which makes two of us. He sometimes speaks of himself in the third person; he regularly mocks his unnamed interrogator; and he pays no attention to chronology. It’s our job to put the tragic incidents of his life in order, to unscramble the taunting clues, to unearth the profundities buried in this misanthropic rumination.

“Andrew’s Brain” hurt mine. The problem isn’t that the novel requires a significant degree of intellectual effort; it’s that it doesn’t provide sufficient reward for that effort.

Those who attend the first Conversations@ event of the semester will be rewarded with a glimpse into an oft-forgotten occupation that runs parallel with writing and publishing, one that can reveal itself as fruitful career for eccentrics like us who love reading and writing but dread the prospect of unpaid heating bills.

By all accounts, Charles is a warm and generous personality revered as one of the most influential books critics in the country. You’ll hear something authentic, hilarious, and well-outside the realm of the typical “sh*t reviewers say” (his words, not mine–for verification, be sure to watch the video below that Charles produced as part of his “The Totally Hip Book Review” series).

Thursday, February 20
A reading by distinguished Butler undergraduate alumni, Matt Yeager and Mike Meginnis, and a conversation on their post-MFA experience.

Monday, April 21
A conversation with Michelle Woods on translating Havel, Kundera and Kafka.