As a writer, it’s easy to feel adrift in a sea of literary magazines. Especially if you’ve been to AWP.

I went last month for the first time and am still recovering. Every morning, I see the same AWP tote bag in the corner of my room, overflowing with bookmarks and pens and magnets, reminders of the journals I vowed to submit to.

Although some of the magazines were upstarts or relative unknowns, there were certain journals that commanded every writers’ respect, publications with lofty traditions and ironclad reputations: if you get published here, you’ve arrived.

The editors of two such journals will join us for our latest Conversations @ Efroymson event at 7:30 tonight. Mid-American Review editor Abigail Cloud and Ninth Letter editor Jodee Stanley will entertain a dialogue about lit mags, something destined to benefit any aspiring writer in the MFA program who dreams of being published in a top-tier journal.

Like Butler’s own literary magazine Booth, Mid-American Review and Ninth Letter are journals associated with Midwestern MFA programs. Mid-American Review is produced by the students and staff of the Bowling Green State University MFA, where Cloud received her degree and now teaches. Ninth Letter is the pride of the University of Illinois at Urbana-Champaign MFA, a program with Stanley installed as its director.

Both Cloud and Stanley are accomplished writers as well, which means they’ve seen both sides of the aisle, been both rejector and rejected. Cloud’s poetry has appeared in Gettysburg Review, Cincinnati Review, and Copper Nickel. Stanley’s prose has graced the pages of Mississippi Review, Crab Orchard Review, and Hobart.

Before you submit to Mid-American Review and Ninth Letter, submit to your writerly urges and join us tonight at the Efroymson Center. It certainly couldn’t hurt your chances.

I’d come up with a clever line to convince you to see Jesmyn Ward at 7:30 p.m. tonight at the Reilly Room, but her work and its resonance demand an introduction more straightforward and sincere.

Last year, I didn’t come across a book more heartbreaking and important that Ward’s memoir Men We Reaped. Unlike many entries in the genre, not a single page is self-indulgent or deceptive. The Mississippi native simply recounts her experience growing up in a working-class African-American family down south, enabling the reader to connect the dots around the systemic issues that box in certain populations from having a fair shake at success.

Men We Reaped tells the stories of five young men close to Ward who lost their lives during a demoralizing four-year span. Each death further illustrates the “cycle of futility” in DeLisle, Mississippi and the byproducts of our society’s benign neglect. One close friend dies of a drug overdose. Another gets murdered after testifying in court. Her sister’s boyfriend falls victim to a train accident caused by malfunctioning crossing lights that no one ever got around to fixing. Her former crush commits suicide. Her younger brother gets run off the road by a drunk driver, a white man in his 40s who ended up only serving three years in prison.

Ward’s story is one that needs to be told. Though many of the same issues are addressed in her two novels, Where the Line Bleeds and Salvage the Bones, which won the National Book Award in 2011, the heaviness of the author’s pen when writing down her own life is palpable. It’s impossible not to be moved by her struggle, her grace, her care. She explains the difference between writing novels and memoir thusly, while encapsulating the compassion that propels her prose:

I loved [my characters in my first novel] too much as an author, I was a benevolent God. I protected them from death, from drug addictions, from needlessly harsh sentences in jail for doing stupid, juvenile things like stealing four-wheel ATVs. All of the young black men in my life, in my community, had been prey to these things in real life, and yet in the lives I imagined for them, I avoided the truth. I couldn’t figure out how to love my characters less. How to look squarely at what was happing to the young Black people I knew in the South, and to write honestly about that. How to be an Old Testament God.

Without a benevolent God to protect her loved ones, the old adage “the devil is in the details” takes on new meaning as Ward observes her world.

The land that the community park is built on, I recently learned, is designated to be used as burial sites so the graveyard can expand as we die; one day our graves will swallow up our playground. Where we live becomes where we sleep.

Though Men We Reap is a harrowing read, there is hope at its core. It is the story of a young, unfairly “other-ized” author, who has transcended the challenges embedded in gender, race, and class, one capable of imparting the following wisdom at the end of her exorcism:

We who still live do what we must. Life is a hurricane, and we board up to save what we can and bow low to the earth to crouch in a small space above the dirt where the wind will not reach. We honor anniversaries of deaths by cleaning graves and sitting next to home before fires, sharing food with those who will not eat again. We raise children and tell them other things about who they can be and what they are worth: to us, everything. We love each other fiercely, while we live and after we die. We survive; we are savages.

Ward’s story is not simply one that needed to be told; it’s one that needs to be heard. Open up your ears and your heart tonight. 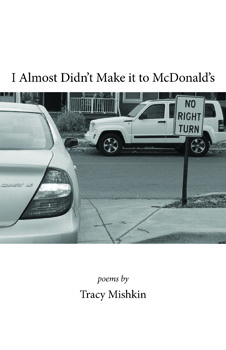 Did you hear that current MFA student Tracy Mishkin has a chapbook available through Finishing Line Press called I Almost Didn’t Make it to McDonalds? Did you know that order it now by clicking here? Are you with me that trying to support each other as writers is an essential part of any MFA community?

Sorry for all the questions. I’ve just been in an interrogatory mood since I got the chance to interview Tracy about I Almost Didn’t Make it to McDonalds, which I’m thrilled to share with you here.

What binds these poems together as a collection?

They were the best stuff I had written as of March 2013, according to my poet friends Linda Lee and Pat Cupp, who looked through many, many poems with me. While I am deeply grateful to my friends, that is a lame answer to your question, and I look forward to learning more about turning a group of poems into a collection in Alessandra Lynch’s class “Shaping a Poetry Manuscript” this summer.

Was it your decision to title the chapbook after the poem “I Almost Didn’t Make it to McDonald’s”? Why do you think it fits?

Yes, it was my decision. I thought it would intrigue potential readers. Finishing Line Press gives authors the option of designing their own covers, and I took the cover photograph at my son’s school, where I make my daily illegal right turn. Risk is a theme in many of these poems—”Pillar of the Community” and “Beginning of the End” come immediately to mind—and of course I have to take risks as a poet in order to write well.

When were most of these poems written? Was there something in particular that inspired this collection or your initial foray into poetry?

I have been writing since at least 9th grade, when I ripped off (or riffed on) a line of Thoreau and won a school contest. These poems were written between 2002, when I first took a class with Alice Friman, and 2013—about half of them before 2010.

Who are your poetic influences?

I’d rather tell you which teachers have had the greatest impact on my work: Chris Forhan, Alice Friman, Alessandra Lynch, and David Shumate. I also learned a great deal at the Indiana University Writers’ Conference, which I attended twice. I studied with A.R. Ammons, Ken McClane, and Phyllis Janowitz at Cornell University, but that was in the 80s, so I am not sure how much it influences me today.

Explain your affinity for the prose poem. What do you think differentiates the form, and how do you best utilize it?

I have been writing prose poems since 2010 or so. The form gives me more flexibility as a writer of primarily narrative poems. When I begin a poem, I usually know if it is going to be a poem with line breaks or a prose poem. But sometimes a prose poem becomes lineated as I revise or a lineated poem goes prose, sometimes months after its inception. Sometimes I turn a lineated poem into a prose poem when I am unsatisfied with the line breaks, but I would argue that it’s not because I “despair of making sense of the line,” as Denise Levertov wrote in 1979, but because I realize that the poem is not a line-break-driven poem and it would be stronger in a prose form.

Your family features prominently in many of your poems. Do you share your work with the members of your family who you’ve written about? If so, what has been their reaction?

Everyone reacts differently. My mother loves to read the poems I write about her, even the one where I imagine her dying. My father is a very private person, so he prefers that I don’t write about him. My teenage son likes all the poems I have written about him, except for one that sounds like it is about him but isn’t. My husband is not a poetry person, so he has not read any of my work, but he inspires some of my best writing and doesn’t have a problem with me writing about him. I try to respect the feelings of my family and friends, but it can be tricky. I am proud to say that I recently wrote a long poem about my great-uncle Joe’s experiences as a POW in World War II and he loved it.

What will it mean to you to sell the advance copies needed to get the chapbook published?

My chapbook will not be printed unless I can sell 55 advance copies by April 25th. If I do, they will print 250 and give me 25. The print run increases as one’s advance sales increase. This is the reality of publishing with a small press, one step up from a vanity press, to be honest. But it’s an important step up. A real publisher likes my work enough to publish a chapbook—wow!—as long as I sell enough copies. Publishing a book of poetry is one of my life-long dreams. I hope that my Butler friends and colleagues will help make that dream come true. In the past, I have been frugal and borrowed people’s books from the library. But that’s changed now. Buy mine and I’ll buy yours. In fact, I might just buy yours regardless.