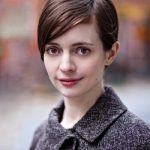 Emily St. John Mandel is the author of four novels, most recently Station Eleven, which was a finalist for a National Book Award and the PEN/Faulkner Award, and won the 2015 Arthur C. Clarke Award, the Toronto Book Award, and the Morning News Tournament of Books, and has been translated into 27 languages.

A previous novel, The Singer’s Gun, was the 2014 winner of the Prix Mystere de la Critique in France. Her short fiction and essays have been anthologized in numerous collections, including Best American Mystery Stories 2013. She is a staff writer for The Millions.