Greg O’Neill, current Butler MFA candidate in fiction is the program’s resident music scene guy. He knows music: Who to watch and where and with whom (hint: with him, if you’re buying). He shares his thoughts on Indy’s music scene.

As a music fan and musician, Indy has always been good to me. There are venues all over the city for both local and touring acts. Places like the Melody Inn which is next to Butler’s campus and books acts as disparate as Japanese punks Peelander-Z and surf-rock god Dick Dale; shockingly legit jazz clubs like the Chatterbox and the Jazz Kitchen; a trio of clubs in Fountain Square — White Rabbit, Radio, Radio and Hi-fi — specializing in everything from burlesque shows to bearded folkies; not to mention your standard outdoor amphitheaters and sporting arenas (I saw both Taylor Swift and Nine Inch Nails under the Pacers banner at Banker’s Life Fieldhouse).

And because Indy inhabits this weird limbo of sometimes-medium-sometimes-major market, national touring acts like Animal Collective, Kurt Vile or Savages will often play more intimate spaces than up in Chicago. Here’s how close you can get: 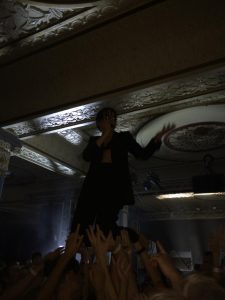 I’m also constantly surprised by all the MCs who just keep spawning in nearby Fountain Square’s hip hop scene, each year culminating in the hip hop block party, Chreece — sold out in its first two years.
I could go on.
And I will.
Only to mention the two stellar record stores in town, Luna Music and Indy CD & Vinyl. They both sell a great selection of old records and host incredible events like in-store performances from artists playing in town.
I like Indy. It’s a tidy little secret with lots of cool people, cheap housing and zero pretense. Find a local and prepare to spend a single digit number of dollars on drinks.

Often misunderstood, Indianapolis is a diverse and politically blue city in a red state which has been earning national attention:  Most Affordable Cities(#2), Forbes’ America’s 20 Best Cities For Young Professionals (#10),  Top 10 Best Downtowns (#3), World’s Most Livable Cities. Restaurants like Bluebeard and Milktooth (both featured in Gourmet magazine) have elevated the Indianapolis food scene to make it one of Zagat’s Top 26 Food Cities. The serious food and drink culture combined with a “100-acre sculpture park, a scenic downtown canal rowed by kayaks and gondolas, an authentic duckpin bowling alley, and the largest children’s museum in the world” earn Indy a spot on Conde Nast’s Most Underrated Cities.

Many of our students and faculty have moved from other cities and have good things to say about it: