What a Year for Goldenrod

Everywhere I look this fall is golden yellow with goldenrod. 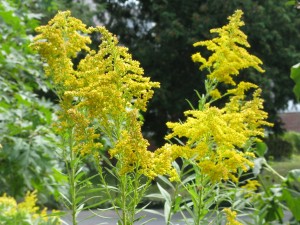 All through fields alongside the interstate, in the Butler Prairie and in my home garden.  The most common goldenrod in our area is tall or Canada goldenrod, Solidago canadensis. This native plant loves old fields and the edges of road and woods.  It is a showy yellow-flowered plant that is falsely maligned as a hay fever trigger.  Goldenrods are pollinated by insects.  The plants make heavy pollen that sticks to insects like bees that carry the pollen from plant to plant to carry out cross fertilization and pollination.  Plants like grasses and ragweed produce prolific amounts of pollen and rely on the wind to carry it from plant to plant. 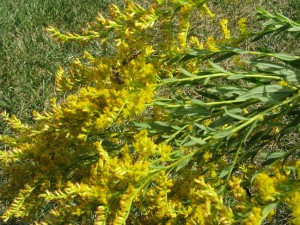 They make flowers without colorful petals because it is not necessary to attract pollinators.  This method of vectoring pollen does result in the production of copious amounts that can end up in the noses of susceptible people, resulting in the allergic reaction referred to as hay fever.  Ragweed and goldenrod bloom at the same time of year, so folks attributed the cause of hay fever to the colorful plants they saw blooming.

I was contacted several years ago by a researcher who wondered if changes in pollen quality might be responsible for honey bee colony collapse.  He claimed goldenrod pollen is the primary food for many bees in the fall, and wondered if climate change may be affecting pollen protein levels.  We hoped to be able to collect pollen from herbarium specimens to compare pollen from 40 years ago with that from goldenrods growing today in the same location.  Unfortunately, the herbarium specimens did not contain enough pollen to test. 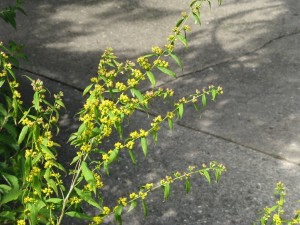 Blue-stemmed goldenrod from my garden. Smaller and tamer than Canada, bought at the INPAWS plant sale several years ago. 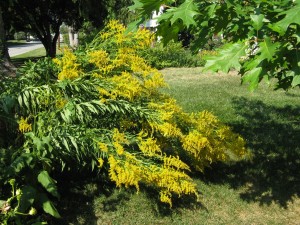 Canada goldenrod in my garden