Now is a good time to see ash trees 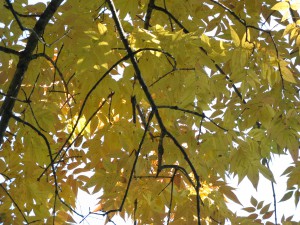 The two most common ashes in Indiana are green ash (Fraxinus pennsylvanica) and white ash (F. americana).  They are both native trees found in local woods and are both common landscape trees in yards and along streets.  Figuring out that a tree is an ash is pretty easy.   Ashes have thick twigs with opposite compound leaves with pinnate (coming off the stem at the same place like parts of a feather) leaflets.  The bark of ashes is distinctive, often having a diamond-shaped pattern of ridges defining its deep fissures.   Ashes have paddle-shaped seeds that look a little like one half of a maple helicopter.  Male and female flowers are borne on separate trees.  Often old flowers remain on trees, somewhat mummified, when they have been infected by mites.  This is one of the most distinctive features of ashes in our area. 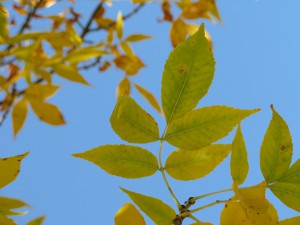 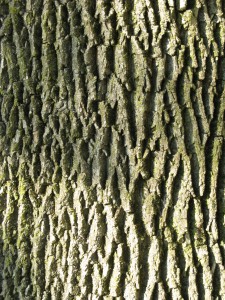 Detail of bark with diamond pattern in the ridges 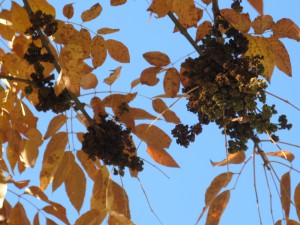 Ash flowers that have been attacked by mites

It is hard to tell green and white ash apart, however.  Characteristics of the leaf scars can work, but on tall trees you often can’t see these.  When naturally occurring, green ash tends to be found in wetter sites, but this is variable and many of our ashes have been planted  Luckily, in the fall, green ashes tend to turn red (think Christmas theme) while white ashes tend to turn yellow. 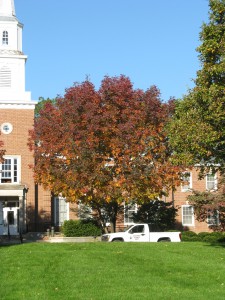 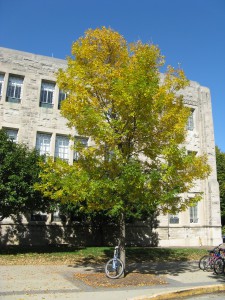 Indiana has three other species of ash.  Blue ash (F. quadrangulata) is usually a smallish tree or shrub (but it can get quite large).  It has winged stems (corkish extentions on the young branches).  Black ash (F. nigra ) is found in moist woods.  I’ve never convinced myself that I’ve seen one.  Pumpkin ash (F. profunda) tends to be a smaller tree with broader leaflets.  Its trunks are often swollen at the base.  It also grows in wet woods.

Fraxinus is an ancient Latin name for trees of this group.   Ash wood is traditionally use for making baseball bats.  It is also used for tool handles and furniture.  Other trees in our area with the common name ash, mountain-ash and wafer ash are unrelated species, what botanists would call “not true ashes.”

All Fraxinus are currently under threat from Emerald Ash Borer bugs.  They are non-native invasive pests that have caused the death of a lot of ash trees in Michigan. They don’t move very far on their own, but can be transported in fire wood.  Trees can be treated with pesticides to protect them.  More information on EAB at: http://extension.entm.purdue.edu/EAB/.

Historical studies show ashes made up 12% percent of Marion County’s woods in the early 1800s.  Recent studies conducted by staff and students of the Friesner Herbarium at Butler University show ash to comprise 3%  of current remnant natural areas in the city.  They are estimated to be 7% of our planted street trees.

The best book on Indiana trees is that by my friend and all around great guy Marion Jackson, 101 Trees of Indiana published by IU Press in 2004.