Ragweed = Food of the Gods?

The Indianapolis Star reported last week that this is a terrible year for allergies.  Adults who have never suffered symptoms are being even being affected.  The severity of hay fever problems was attributed to the mild winter and summer drought.  I was happy to see that the photo that accompanied the article was one of ragweed (Ambrosia sp.), correctly identified.  Often on TV, and once previously in The Star, photos of plants in hay fever stories show the seeds of dandelion or a related plant.  I guess this is because pollen, the major trigger of hay fever, is too small to show easily.  While we can all related to seeing dandelions seeds spread by the wind, they don’t tend to end up in our noses.

Wind pollinated plants cause hay fever.  Ragweed is a classic.  Its long spikes of flowers are 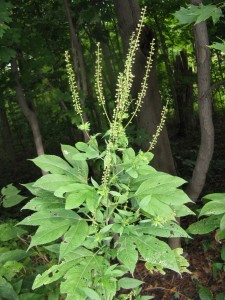 Ragweed in flower in all its glory.

essentially made up of either all female reproductive parts (carpels) or male reproductive parts (stamens).  These plants do not rely on insects to vector, or carry, pollen from flower to flower to fertilize seeds.  Instead their strategy is to produce copious wind-blown pollen that must land by chance on the correct flower part to be able to fertilize an egg.  This strategy is chancy, so much pollen is made to increase the odds.  Wind pollinated species do not invest energy in making showy flowers to attract unneeded pollinators.  Indeed, petals would get in the way of wind-blown pollen transport.  This is why ragweed and other wind pollinated plants are often overlooked in flower; flowers are greenish and dull.  Grasses, some that bloom in the spring and some in the fall, are another plant group that uses wind to spread pollen.  So are hardwood trees that bloom in the spring.

Giant ragweed (Ambrosia trifida) is a native species that can grow 10 feet or taller.  Its most characteristic features are its three-parted leaves and spikes of flowers. 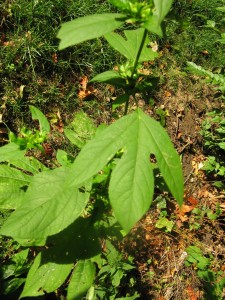 Male flowers look like yellow clusters or packages of pollen close-up.  The genus name Ambrosia means “food of the Gods.” No one is sure why. 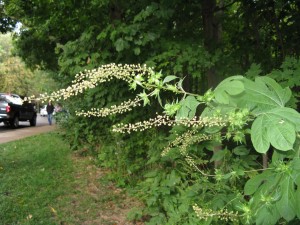 This entry was posted in Uncategorized and tagged Ambrosia, hay fever. Bookmark the permalink.