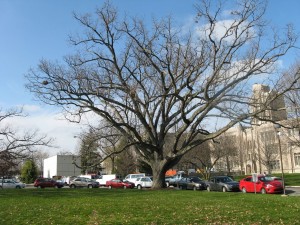 This time of year is a good time for noting individual trees in the landscape.  Their shape and growth form helps you know the history of a site.  Trees that grow in forests tend to have few outward extending lateral branches.  Open-grown trees, free from competition with other trees for light that occurs in forests, tend to have large lateral branches.  Some natural habitats, like savannas, are characterized by scattered open-grown trees.  In central Indiana, large open-grown trees are mostly found in yards and parks where they have been planted or in places where the woods around them was cleared a long time ago when they were small young trees. 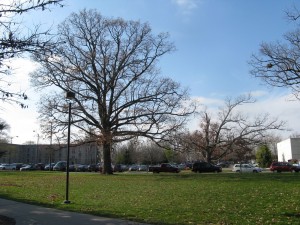 There are some classic open-growth architecture trees on the Butler University campus.  The campus was Fairview Park prior to Butler moving to the Butler-Tarkington neighborhood in the late 1920s.  A ring of oak trees partially surrounding Atherton Student Center are amazing examples of the open- grown form.  They must have been planted around the time Fairview Park was established at the turn of the 20th century. 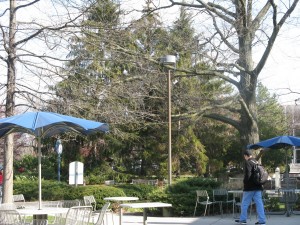 Evergreen trees in the landscaping at Butler University.

Another striking feature of the landscape this time of year is the presence of evergreens.  All conifers, cone-bearing trees, in Marion County have been planted, with the possible exception of Eastern red cedar, Juniperus Virginia, based on early records of the native flora.  All the winter color and wildlife cover they provide are the result of human efforts.