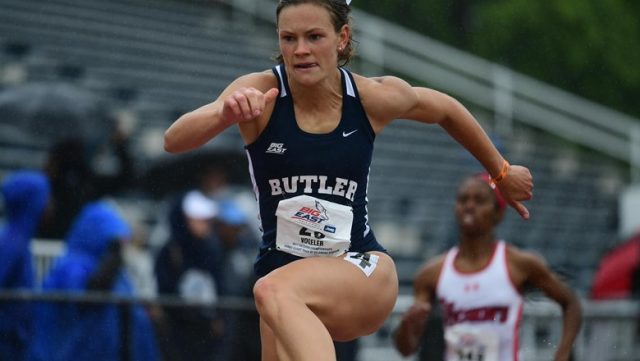 On Feb. 16, the Butler men’s and women’s Track and Field teams traveled north to South Bend to take part in the Alex Wilson Invitational.

Senior Allie Vogeler highlighted the Bulldogs’ weekend with a first-place finish in the 200 meters. Vogeler also set a school record by finishing with a time of 24.96, breaking the old record of 25.56.

In the men’s mile, freshman Clark Otte won his section and finished in ninth overall with a time of 4:16.59. In the women’s mile, Mia Beckham ran a personal best 5:00.43 which was good for second place in her section and 13th overall.

In the men’s 400 meters, Jacob Uhl finished second in his section with a time of 48.87 which placed him ninth overall. His teammate Connor Fuller finished 18th overall with a personal best time of 50.77.

In the men’s 800 meters, Johnny Leverenz finished sixth overall, nearly beating his own Butler school record. His teammates Chandler McGaha and Eric Baugh also finished 19th and 20th in the 800, respectively. For the women, Camille Hines and Angelina Ellis both had strong performances. Hines finished 16th overall and Ellis set a personal best of 2:13.38 to finish 20th.

Jake Bowers was the lone Bulldog competing in the 200 meters, where he took ninth place with a time of 23.23.

Next up for the Bulldogs is the 2019 BIG EAST Indoor Championships being held Feb. 22 and 23 in Geneva, Ohio.