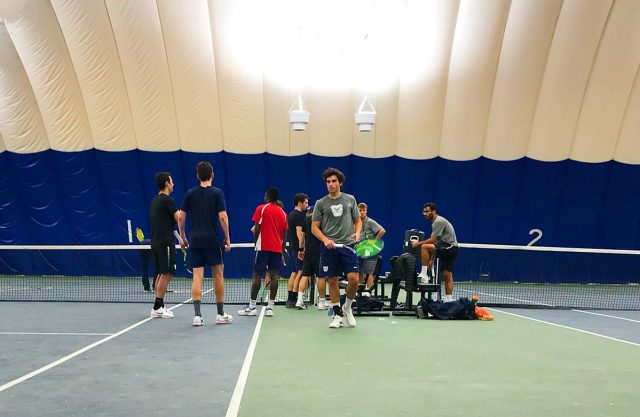 It was a productive weekend for the Bulldogs with racket in hand. The men were able to take down Valparaiso and Marian at home, while the ladies took to the road and came up with hard fought victories over Dayton and Wright State.

The men extended their winning streak to four matches, with an overall record now sitting at  5-1. The first of their Saturday matches in the Butler Bubble slated them against the Crusaders from Valpo.

The matchup was tight in competition, with four of the six singles matches going to the third set. To open play in the afternoon, Thomas Brennan/Olaf Wiklund won the first set of doubles play 6-4, followed up by Alvaro Huete Vadillo/Zach Trimpe winning 7-5 from the No. 3 spot to secure the doubles point.

Heute claimed the Bulldogs second win to put Drew Michael in position to take the win for the team from the No. 5 spot. After losing the first set 5-7, he battled back to win the second and third 6-4, 6-1.

Against Marian, Butler repeated the success they had in doubles play by winning from the No. 1 and 3 spots yet again. Only three singles matches were needed to decide the victor. Filip Tensing, Heute, and Wiklund won straight set victories to claim the win for Butler.

The women’s team was able to get things done on the road in Dayton over the weekend. They started strong by sweeping the Flyers for the doubles point, with wins from the No. 2 and 3 spots 6-3.

To start off singles play, Logan White won straight sets in the No. 1 spot 6-1, 6-3. However, consecutive losses by Sarah Monesmith and Lauryn Padgett, things were knotted up at 2. In the No. 3 spot,  Emily Neal started her singles play in promising fashion, but fell 4-6, 1-6, giving Dayton the edge 3-2.

After tying things up with a win in the No. 5 spot,  Nina Bertino took down her competition in three sets 6-3, 7-6 (8), taking home the win for the Bulldogs.

To follow up against Wright State, the Bulldogs started off trailing 2-0 after dropping two of three sets in doubles play, along with a loss by Padgett in the No. 2 spot.

The Bulldogs needed to come from behind to take the win and that’s exactly what they did. In the No. 4 spot, Bertino was able to come out on top and then Hallie Leblebijian made her first appearance, able to fight to 6-4, 7-5 set victories to give Butler the win.

Next up: vs. U-Indy, vs. Western Michigan