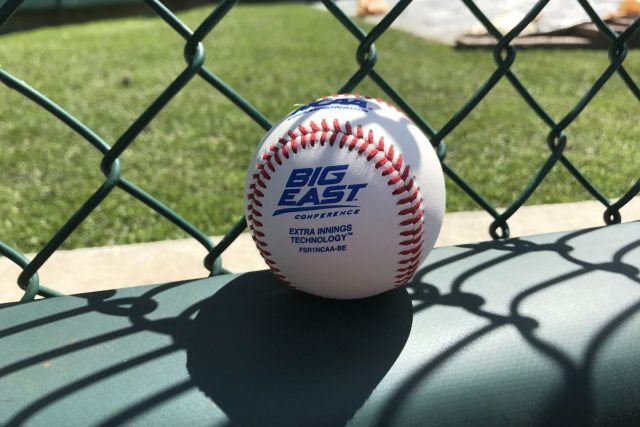 The Huskies returned to the Big East last year and wasted no time in making their mark as they won the Big East championship over Xavier, which sent the Huskies to the National tournament. This year the preseason polls selected the Huskies to repeat as the conference champions. Even after losing LHP/1B Reggie Crawford to Tommy John surgery in the fall. Numerous scouts across Major League Baseball have put Crawford as a top draft prospect after Crawford showcased a fastball that topped at 102 in the Cape Cod league. UConn started the season 11-1 while riding a 10 game winning streak. The Huskies starting rotation has been the backbone to this incredible start in the college baseball season. Purdue transfer Austin Peterson has pitched in 37.1 innings and struck out 60 hitters in six starts. Sophomore Pat Gallagher has appeared in six starts and has an ERA of 2.67 and struck out 40 hitters over 33.2 innings. Finally, graduate student Enzo Stefanoni has a 2.70 ERA and has only walked one hitter in 33.1 innings pitched. UConn’s starting rotation is one of the best in the country and might be the deciding factor on if UConn repeats as conference champions or not.

Georgetown has been the most surprising team in the Big East thus far. The Hoyas were pinned to finish seventh in the conference this season, which would put them second to last. Georgetown broke out the bats this season to propel them to second place and seven games above .500. Their sophomore first baseman Jake Hyde has built up a strong case to be the Big East player of the year through six weeks. Last season Hyde batted a .159 with no home runs. This year Hyde has flipped the page and is batting well over .400 with 10 home runs and just nine strikeouts over 23 games. Another huge contributor to go along with Hyde has been junior Andrew Ciufo who has reached base in 20 of the 21 games he has participated in. Ciufo’s .438 on-base percentage is the second highest on the team and one of the best in the conference. Georgetown has passed the test through the first few weeks of the season but will the bats stay hot once conference play begins?

The Blue Jays were voted to finish second in the conference just behind the Huskies. One of the reasons why voters voted Creighton so high was because of first baseman and 2021 Big East freshman of the year Alan Roden. In last season’s campaign, Roden batted over .370 with 17 doubles, nine home runs and 47 RBI’s. This year the power just hasn’t been there for Roden. Through 17 games Roden has seven extra base hits, one being a home run. The Blue Jays also had their Junior pitcher Dylan Tebrake awarded the Big East pitcher of the year in preseason polls. Tebrake went 8-0 last year with a 2.73 ERA with 75 strikeouts over 72.2 innings in 2021. This year the right handed pitcher was not off to a good start allowing five earned runs in 7.2 innings. His biggest issue has been a lack of control walking 14 hitters in 31.1 innings this year thus far. Opponents are not hitting Tebrake but between the high walk rate and strikeout rate Tebrake has not been able to go past the sixth inning for Creighton. This team opened the season 1-5 but has settled in going 10-2 over the next 12 games to propel them back into the top of the conference and are riding a seven game unbeaten streak.

The Musketeers went the distance in last year’s tournament before losing to UConn in the Big East championship. Behind their dangerous offense Xavier has the capabilities of getting back to that final round of the tournament. The Musketeers currently have seven players batting over .300 and one just outside that magical .300 mark. The team was led by slugger Luke Franzoni early in the 2022 with the senior placing himself in the top 10 in the country with 10 home runs. His teammate Jack Housinger has nine home runs which is also in the top 10 in the NCAA. Jerry Huntzinger and Andrew Walker have been essential for the offense, they have been setting up the table with high averages and stolen bases. Xavier’s starting rotation has been struggling through the six weeks. All three starters have ERA’s well over six and the staff has suffered as the team ERA is currently sitting at 6.62. Credit to Xavier as they began the season 0-9 with some heartbreaking losses to Alabama and Louisville. Since then this squad has gone 10-4 and put themselves back in the top half of the Big East.

There were so many questions surrounding the Butler Bulldogs heading into the season. With so many transfers and freshmen heading to Indianapolis the preseason poll put Butler at sixth. The squad has been led by High Point graduate transfer Travis Holt. Holt is hitting at a .358 clip, three home runs and has 13 stolen bases. Former Stetson Hatter Aaron Steinhart has also collected 12 extra base hits with six leaving the yard. The story for the Bulldogs is very similar to Xavier Big East Baseball where both the offense has been the story behind the success, but the pitching has struggled this year. The team’s ERA was a 7.98 which is in the bottom of the Big East in that category. Butler is still looking to settle down their pitching and continue the hot bats once conference play starts and try to return to the Big East tournament since 2018.

St. John’s was selected to finish fourth and punch in their ticket to the Big East tournament. The Red Storm struggled losing 11 straight games beginning their season 1-14. But, behind an incredible weekend performance by Redshirt sophomore Kevin Michaels who went 12-14 with the first St. John’s cycle since 2007. Michaels now has a .368 average which is the second highest on his team. The leader is a fellow redshirt sophomore Tate Ballestro who is batting a .402, with seven doubles, two triples and two home runs. The Red Storm’s offense has been good but the team’s ERA is just over a seven and don’t really have a solid rotation as the team has plugged in different starters trying to find out their weekend rotation before April.

Villanova was pegged to finish dead last in the 2022 season. The Wildcats have had some solid players such as centerfielder Chris Rotondo who has a .377 average, six home runs and 21 RBI’s. Rotondo has also been phenomenal in the center field for Villanova. The Wildcats have been led by their senior ace Cole Patten. Patten in six starts has only allowed nine earned runs over 39.2 innings and struck out 39 hitters. Unfortunately the Wildcats have struggled outside of those two stars and that has put them at seventh in the conference thus far.

The Pirates were picked to finish sixth this season, but currently the team is in last season with a very bad run differential against them. Seton Hall could be the team that turns it around once the Big East season starts because no one else in the conference has had a tougher schedule than the blue and silver. Seton Hall started the season against now 13 North Carolina, then played in the swamp against 11 Florida and 11 Oklahoma State. The team started 0-12 before they picked up an upset win over Florida. Freshman catcher Jedier Hernandez has had a great start to his collegiate career batting a .302 in 14 games Hernandez has played in this season. The Pirates may be 15 games below .500 but there is plenty of baseball left to be played this season.