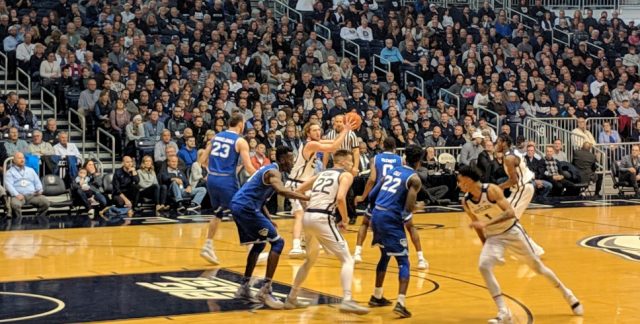 The Butler men’s basketball team snapped a three-game losing streak with a 70-68 win over Seton Hall on Feb. 2 inside Hinkle Fieldhouse.

Butler jumped out to a 26-13 lead and made six of its first eight 3-pointers. The Bulldogs shot 63 percent from the field and 60 percent from deep in the first half, taking a 46-34 lead into halftime.

After contributing only two points in the opening 20 minutes, Seton Hall guard Myles Powell scored 19 second-half points and hit a three to tie the game at 68 with 42 seconds left.

Paul Jorgensen gave Butler the lead back on the next possession thanks to a goaltending violation. Powell missed a three at the buzzer that would have won the game for the Pirates.

Butler’s bench contributed 36 of the team’s 70 points, including a team-high 18 from Jorgensen and season-best 15 from Nate Fowler.

Butler’s next game is at Georgetown on Feb. 9 at noon. Three of the Bulldogs’ next four contests are on the road.

Five keys for Butler vs. Creighton