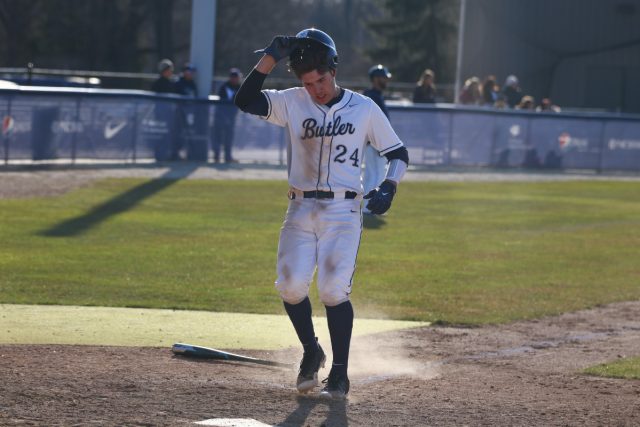 Game One vs. Saint Peter’s

The Bulldogs combined for 16 hits in the 21-7 offensive blowout. Big game from Butler right fielder Harrison Freed, who went 4-5 with seven RBI’s.

Game two was much more closely contested than the first.

After going down 1-0 in the first inning the Bulldogs scored five unanswered runs to defeat the Chippewa’s by a final score of 5-1.

A clutch RBI single by Harrison Freed in the fifth and a sacrifice fly by Connor Dall helped secure the win.

A good combined pitching effort by Ryan Pepiot and Jack Myers only allowing one run.

Game three was a high intensity game going back and forth and finishing in extra innings.

The Bulldogs took the lead in the first going up 1-0. Starting pitcher Same Hubbe did his job shutting out the Panthers through five innings.

The game was tied at three after a full nine innings. In the bottom of the tenth, Pittsburgh left fielder Ron Washington Jr. hit a walk-off single.

Both offenses had trouble getting going, but the Panthers came out with the 4-3 win.

Butler came back with the bats in the final game of the invitational, putting up seven runs in the first five innings.

The Bulldogs offense could not be stopped in this game beating Hofstra 10-5.

Big games again from Butler’s Kyle Smith and Harrison Freed, who combined for seven RBI’s in the victory.

The Bulldogs now have a .500 record at 5-5 and look to move forward in the season. Their next game is at home against Purdue Fort Wayne on March 8th.

Bulldogs Get Back on Track vs. DePaul