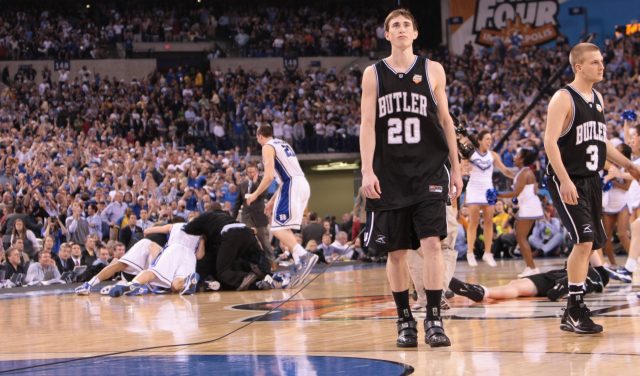 Gordon Hayward walks off the court after missed half-court heave in 2010. Photo courtesy of The Butler Collegian.

The words of the final moments from Jim Nantz still haunt Butler basketball fans even ten years later. The hope of being a small school with no national prominence slaying college basketball’s Goliath in its home city were dashed.

Had the shot gone in, it no doubt would’ve been the greatest moment in college basketball history. Yes, better than Lorenzo Charles’ dunk for NC State to take down Phi Slama Jama, better than Christian Laettner’s shot to beat Kentucky, even better than Kris Jenkins’ championship buzzer beater over North Carolina.

Butler basketball in 2010 embodied the American dream. The team was filled with talented, yet hard-working players who did all of the dirty work necessary to have an opportunity for success.

The next season, Butler minus Gordon Hayward used the exact same blueprint to advance to their second consecutive Final Four, but a horrific showing on offense and a guy named Kemba Walker sent the Bulldogs home unsatisfied in the second straight national championship game.

Those two games have absolutely changed the way Butler University and its mens’ basketball program looked just ten years ago. But one can’t help but wonder what would be different had those outcomes been different. What if Hayward’s heave fell at the buzzer? What if Butler played to their capabilities and became back-to-back national champions?

Let’s take a look at three things that could’ve changed had Butler had two championship banners hanging in Hinkle instead of two “national finalist” recognitions.

Part I: The Coach

Butler’s run to the Final Four in 2011 proved that Butler was no flash in the pan. And with Gordon Hayward gone to the NBA, a team led by Shelvin Mack and Matt Howard had no business being there, proving Brad Stevens’ worth as a head coach of a basketball team.

The Boston Celtics realized this and scooped up Stevens when Doc Rivers left for Los Angeles in 2013. It’s an amazing opportunity. The Celtics are probably the second most iconic NBA franchise. According to Stevens, it was one of a few jobs that could take him away from Butler.

Does that change if Stevens has two college national championships under his belt? Let’s use history to answer the question.

There are 15 coaches in this history of college basketball with at least two national championships as a head coach. The list ranges from John Wooden’s ten to Jay Wright’s most recent two with Villanova.

Ironically, these three and Brad Stevens would be four coaches to win their two championships in back-to-back fashion.

So, yes, it is possible that Stevens still leaves for Boston or another NBA job down the line. However, just over two years removed from cutting down the nets in Houston, we’re going to take some creative liberty and say Stevens spurns the NBA for now.

Next, a multiple-time national champion recruits better players because of the exposure. There’s a reason a small school like Gonzaga is getting a consensus five-star in Jalen Suggs next year. Winning a championship in college is a great steppingstone to more exposure in front of NBA scouts and executives. Winning is the greatest marketing tool for a program.

Butler now has two banners hanging in Hinkle’s halls and their elite coach sticking around for the short term, the Bulldogs now have two great attractions for elite high school talents.

We’ll be replacing scholarships for higher-rated players that could’ve committed with a better pitch from Stevens with two rings on his finger.

As Class of 2011 high school seniors were likely already committed to their schools while Butler was making their second national championship run, they’ll be left untouched – although current-Pacer Malcolm Brogdon held a Butler offer and was in this class.

In the class of 2012, Stevens feels good with hometown kid Kellen Dunham and looks ahead to recruits in future classes.

In the class of 2013, Stevens starts to really ramp up his recruiting. Butler nearly misses out on Demetrius Jackson who goes to Notre Dame closer to his hometown. Here, we’ll swap out a Nolan Berry scholarship for Nigel Hayes, who you might remember from Wisconsin’s glory days. Stevens settles with his next-best point guard by giving Elijah Brown’s original scholarship to Darius Thompson, who went to Tennessee in real life. Stevens decides not to offer Rene Castro to save scholarships for next year’s class. And Stevens keeps his commitment to Andrew Chrabascz.

This year is going to hurt a lot for current Butler fans, so just plug your ears. This is a big year for Brad Stevens. We’re going to replace Kelan Martin’s offer and give it to Trevon Bluiett, who decides to stay for his hometown team. Jackson Davis’ offer will go to another real-life Xavier player in JP Macura, who nearly committed to Butler in the original timeline. Next, Tyler Wideman misses out an offer in favor of Isaac Haas who spurns in-state rival Purdue for the new leader in the state. Good, ripped that band-aid off as painlessly as possible.

With such a big freshman class the year before, Coach Stevens takes a bit of a year off to focus on development. Nate Fowler’s offer goes to Ray Spalding, Louisville Cardinal in real life. Sean McDermott’s offer remains, and he’ll redshirt like in the original timeline. Trevon Bluiett wins the Big East’s Sixth Man of the Year award.

I lied. We’re still not done with painful decisions. Since no one knew Kamar Baldwin, he thrived as an under-the-radar recruit for Chris Holtmann. In this timeline, Brad Stevens is going for bigger fish. His offer goes to Zavier Simpson, formerly of Michigan. With big men accounted for, Joey Brunk no longer fits, so his offer goes to Kyle Guy, who decides to flip from Virginia to Butler to stay closer to home. Lastly, Henry Baddley’s offer will go to Andre Wesson, formerly of Ohio State, to add some versatility that is Roosevelt Jones finally graduating. In a crowded backcourt, Darius Thompson decides to transfer.

Marveling his work from the year past, Stevens takes another year off hitting the recruitment trail hard. Aaron Thompson’s offer remains as his play style is needed with this many scorers on the team. Brad Stevens hits a homerun as he gives Jerald Gillens-Butler’s offer to Indiana Mr. Basketball Kris Wilkes, who agrees to take a year to learn under All-American Trevon Bluiett (hurts me, too). Christian David’s offer goes to Ike Obiagu, formerly of Florida State, to fill out big man depth. It’s a special year for Butler as Trevon Bluiett wins Big East Player of the Year, becoming Butler’s all-time leading scorer (ouch), JP Macura wins Big East 6th Man of the Year, and Butler wins the Big East Tournament for the first time in school history and ride that momentum to another Final Four appearance.

Coach Stevens is looking to go for the title this year. He starts it by using Bryce Golden’s offer for Indy-native Aaron Henry, formerly of Michigan State, and give Markeese Hastings’ to Jaxson Hayes, who Butler was hot on the trail for in real life. Like in the original timeline, Ray Spalding leaves Butler for the NBA. Kyle Guy wins Big East Player of the Year. JP Macura wins 6th Man of the Year again. Stevens and his backcourt from the class of 2016 carries Butler to the promise land with their third National Championship of the decade.

As we have to follow the NBA decisions of players in the original timeline, Kyle Guy, Kris Wilkes and Jaxson Hayes bolt from the team to join the NBA ranks. Brad Stevens steals another Indiana Mr. Basketball, this time Trayce Jackson-Davis of Indiana with John-Michael Mulloy’s spot on the roster. Stevens still offers top-100 recruit Khalif Battle. Regression was expected with so many pieces leaving from the national championship team. A down year for this team is still a trip to the Sweet 16. They’ve set themselves up well for the future.

Is this realistic? Probably not, but it is interesting what could’ve been for this program. As I mentioned, Butler still ends up in the Big East, as it is a perfect fit for them, but Coach Stevens’ competition for recruits definitely comes for the Big Ten. Two trips to the national championship game does so much for a program. Remember, Butler belonged to the Horizon League just ten years ago. However, turning the results of those games around has a ripple effect on the roster for years to come. Does passing over Kelan Martin and Kamar Baldwin make up for the roster they did have? One can only speculate.