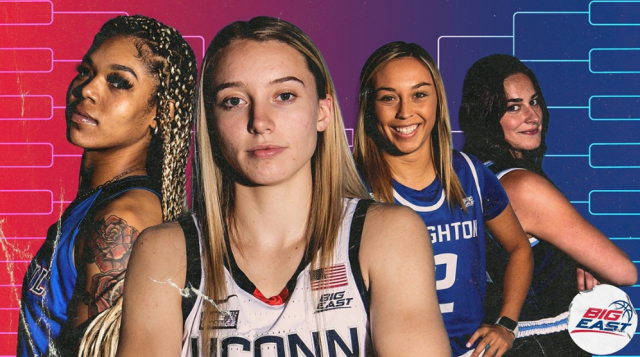 March Madness is here, and the Big East has a solid showing, sending four teams from the conference to the Big Dance. This matches the most teams sent to the tournament over the past several years, with the last time being in 2018 when four bids were earned from the Big East. This year’s teams include Connecticut, Creighton, DePaul and Villanova.

Coming off their Big East tournament win as well as winning the Big East regular season, the Huskies are the 2 seed in the Bridgeport region. They will have a home court advantage the opening rounds, playing in Storrs against Mercer this coming Saturday, March 19 at 1 p.m.

UConn has faced significant adversity this season as star Paige Bueckers missed most of the season due to a left knee injury on December 5. Several other Huskies have missed games throughout the season with various injuries, but the challenges have made the team stronger as top freshmen Azzi Fudd and Caroline Ducharme have stepped up. A full roster of Huskies look to advance to their 22nd Final Four and make a run at their 12th National Championship.

The Bluejays finished third in the Big East and were slated as a 10 seed in the NCAA tourney. They face 7 seed Colorado in the Greensboro region, playing in Iowa City their first game.

This is Creighton’s eighth tournament appearance, fifth under head coach Jim Flanery. The team had a 20-9 record and finished third in the Big East. Sophomore Emma Ronsiek was awarded an All-Big East First Team selection, averaging 14.9 points per game and 5.1 rebounds per game. The Bluejays will have a tough road as if they escape Colorado, they will face star sophomore Caitlin Clark who leads the nation in points.

DePaul will play the Dayton Flyers tonight at 9 p.m. in a First Four matchup. The team finished the season with a 22-10 record and would play sixth ranked Georgia in the Greensboro region with a win. Freshman Aneesah Morrow has led the way for the Blue Demons the entire season and looks to continue that in the postseason. Morrow was named a Second Team All-American by the Associated Press, The Athletic and Sports Illustrated. She was unanimously voted Big East Freshman of the Year and set the record for points scored by a freshman in a single game with 41 against Creighton.

Villanova is the 11 seed in the Wichita region playing in Ann Arbor the first round. The Wildcats finished second in the Big East tournament as well as second in conference play. They were the only team in the Big East to take down UConn, handing them their first conference loss since 2013. Junior Maddy Siegrist is a player to watch for the Wildcats. Siegrist is second in women’s college basketball in points per game, averaging 25.9 with 647 total points on the season. Villanova will face BYU in the first round on Saturday, March 19 at 1 p.m. BYU comes into the matchup with a 26-3 record.

While the Marquette Golden Eagles and the Seton Hall Pirates didn’t make the cut for the NCAA tourney, they have both accepted invitations to the Women’s NIT tournament. This year, the Women’s NCAA Final Four and National Championship will be played in Minneapolis and hosted by the University of Minnesota, Twin Cities and Minnesota Sports and Events.

Outside the Dawg Pound