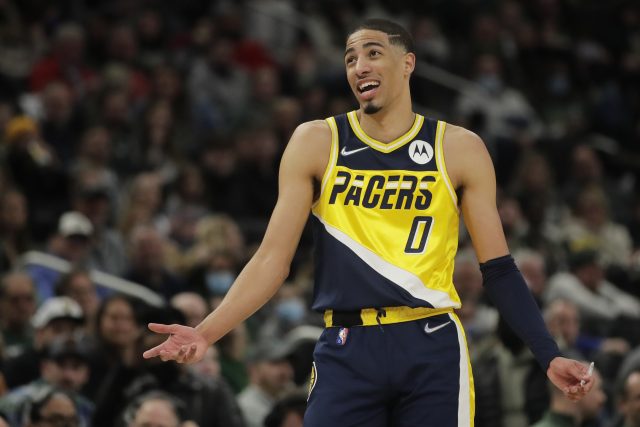 As another season draws to a close for the Indianapolis Pacers, a 25-57 record is probably not one most fans or even the organization itself were looking for. As the off season ramps up and the playoffs begin, the pacers once again have to look to the future to try and chase greatness and obtain their franchise’s first NBA title.

This season wasn’t a complete waste for the Pacers. They were participants in one of the season’s biggest trades. They sent their franchise big man and leader of the team, Domantas Sabonis, as well as role players Jeremy Lamb and Justin Holiday, and a second round pick over to the Sacramento Kings. In return, they received a young dynamic back court in sophomore player Tyrese Haliburton and three point specialist Buddy Hield, as well as a solid rotational center in Tristan Thompson.

This trade made sense for both teams, the Kings had an abundance of guards, and they needed to move on from some and the pacers have struggled to maintain a star in the back court. They though Paul George was going to be the next face of the franchise, before he demanded to be traded, and the same thing happened with young star Victor Oladipo before injuries derailed his career and had him wanting to move on as well.

Both Haliburton and Hield benefitted from receiving featured roles in a struggling Pacers offense. Haliburton averaged just shy of 18 points a game with 9 assists and 4 rebounds, all on over 50% shooting. This is an increase across the board compared to his stat line of 14-7-3 that he averaged with the Kings.

The same goes for Hield who had career highs in both assists and rebounds. Hield also added a solid 18 points per game average while launching around 9 threes per game.

This new, dynamic back court gives fans a reason to be excited. The Pacers also drafted the 2021 Pac-12 player of the year, Chris Duarte, out of Oregon, who was a key contributor for the Pacers. The Pacers also have brought up G-League standout and this year’s G-league scoring leader Justin Anderson. Add in the resigning of fan favorite Lance Stevenson for a solid veteran presence off of the bench, and you have pieces to build a team around.

The last key to this young, hungry pacers team could come in the form of this year’s draft. The Pacers currently own a 10% chance of having the top pick in this year’s draft, and a 42% chance of having a top 4 pick. In a star-studded draft with players like Gonzaga’s Chet Holmgren, Auburn’s Jabari Smith, or Duke’s Paolo Banchero, the Pacers have a lot to gain by hitting big on the draft lottery. The amount of insane front court talent the pacers could obtain from a top pick in the NBA draft could be the key to building the contender the Pacers.

The Pacers have been to the playoffs sixteen times since the year 2000. From stars like Reggie Miller, Jermaine O’Neal, Paul George and Victor Oladipo, the Pacers have just never been able to build a dynasty.

As the Pacers look towards the future, they hope that this trade with Sacramento helped to lay the foundation for years to come. This year might not have been the one that the Pacers had hoped for, this may shape up as being the season they needed to put themselves on the road to greatness.