Wade Walder is the reigning Outdoor Track and Field Big East Conference decathlon champion, but he was once a walk-on at Butler and didn’t start competing in multi-events until getting to the collegiate level. Get to know Walder as he chases another Big East crown.

Butler 360 Sports: How do you describe yourself as a track and field athlete?

Wade Walder: I’m a decathlete. I compete in the multi-events, heptathlon indoor and decathlon indoor. But I also say I compete in some of the open events. Last season I competed in the open pole vault, open hurdles, open javelin.

B360S: In high school, you were a pole vaulter and a hurdler, was it a conscious decision going into college to pursue those long-winded events?

Walder: When I decided I was going to run in college, I probably wasn’t good enough at those individual two events to do them only in college and on top of that I didn’t see myself being able to compete year-round in those two events. I wanted something where I would stay busy year round. Coming into Butler, not a big pole vault school, it wasn’t something I would be able to train year round for. My high school coach mentioned the decathlon to me my senior year of high school and it was something that stuck in my head. When I came here, I talked to the coaches about giving it a try and they were all for it.

B360S: What is appealing about the decathlon and heptathlon?

Walder: I’ve been doing it for two and a half, three years and I’m still learning every event. Every day I’ve got stuff I’m desperate to learn and after PR’s and after good performances, I never feel like I’m done. There’s always the next step and even if I have a great meet it’s a matter of doing it in the decathlon or doing all events perfectly. It keeps you reaching.

B360S: How do you gauge success and performances?

Walder: It all depends on the point in the season. At the Big East Championships, it’s not about the times you run but about who you beat. The point of that meet is to score as high as you can. The goal leading up to that meet is to put yourself in the best position for that championship meet. In that setting, it is a lot about the times we run, the marks I make in the event but it is also about how I feel. I could have a bad mark but feel like I learned a lot at that meet or fixed something and got better. That meet is as exciting as doing well.

B360S: Do you focus on certain events to get your points or are you trying to be as well rounded as possible?

Walder: I’m trying to maximize points whether I’m good or bad at an event. I take a good look at the points system and as we get closer to the season I ask myself where I can find the most points. Right now it might be pole vault so I might throw more practice into pole vault to try to get that as good as possible. But in the end, you’re really focusing on all ten events.

B360S: You were originally a walk-on, what was your mindset coming into college?

Walder: A lot of time was spent proving to myself and other people that I’m a Division I athlete. Whether that’s my teammates, my coaches, myself, my high school teammates. It wasn’t something that I was supposed to do necessarily. A lot of it is just trying to fit in and it’s tough to do when you’re moving to a new event. So not only am I competing against college athletes but I’m competing against college athletes in events I’ve never done before. It’s tough mentally, but you just take it a meet at a time, keep dancing within your own circle and once you have success it’s really easy to get out of that mindset. It’s not something I’ve thought about in a while.

B360S: Was there a point where you knew you belonged at this level of track and field?

Walder: Pretty early into my freshman year when meets started going well and I saw what the conference was doing, I knew I could compete at this level. The Big East wasn’t super strong in the multi-events my freshman year. That made me feel like I didn’t need to do anything crazy to compete. Right away I felt like I could compete in the conference and be as good as everyone else.

B360S: Did you play other sports growing up?

Walder: I grew up playing baseball and basketball. I would say basketball was definitely my main sport. I went into high school freshman year I played basketball and was planning on playing baseball in the spring. But I’m from a pretty big high school and after the season my coaches told me you’re good enough to make the sophomore team but if you want to make varsity you have to get faster, stronger, more athletic. After that season, my main goal was to play varsity basketball so I decided to join track, had a couple of my coaches on the staff. I just fell in love with pole vaulting. It was the best decision I ever made.

Walder: One thing that’s always stuck with me that my basketball coach said in high school was just always be a leader. That’s in athletics and throughout my life just always try to make other people around you better. 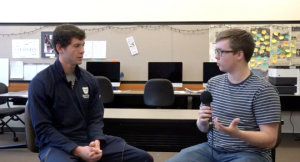