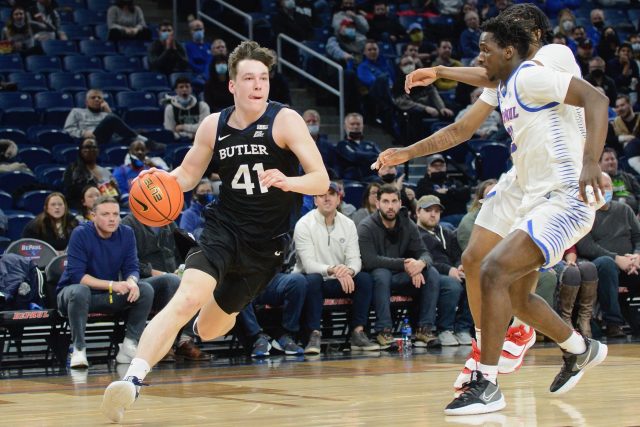 The Bulldogs were short handed in Chicago as Bo Hodges and Bryce Nze were ruled out due to injuries they sustained against Marquette on Saturday. Hodges has been one of the bright spots for Butler recently scoring in double figures in the last three games.

With Hodges and Nze out, Butler turned to Freshmen Simas Lukosius and Jayden Taylor to take their place in the starting lineup. While also looking to Bryce Golden and Chuck Harris to lead the way in their absence.

Butler, which defeated DePaul 63-59 back on December 29 at Hinkle Fieldhouse, swept the season series.

The first half saw a little bit of everything. It was a hot start for both Chuck Harris and Bryce Golden, but two quick fouls sent Golden to the bench for the majority of the half, allowing Harris to take over.

Early on, Butler turned the ball over seven times, but they made up for their lack of ball control on the boards, and out-rebounded the Blue Demons 15-4.

Butler moved out to an early lead, thanks to a deep 3-pointer from Harris that forced DePaul’s Head Coach Tony Stubblefield to call a timeout. The timeout appeared to fuel the Demons to turn things around. The Demons played with more intensity and made Butler pay as they continued to turn the ball over throughout the half.

Back and forth scoring kept the score close, but a 10-point run lead by David Jones and Javon Freeman-Liberty of DePaul gave them the lead late in the first half. Butler managed to tie the game at 35 to end the half by using a 6-0 run over the final three minutes.

Butler finished the half shooting 50% and out-rebounding DePaul 19-15. DePaul only shot 37% from the field, but knocked down six three-pointers to Butler’s one. There were 10 lead changes alone in the first half.

Harris lead all scorers in the first half with 12 points, while Jones lead DePaul with nine.

The Second half started off hot for the Bulldogs as Golden returned and made an impact right away. But another quick foul, sent him back to the bench. With Golden out, Harris shined, hitting another deep 3-pointer to take an early second half lead, 40-35.

Two quick fouls on Harris, sent him to the bench and opened the door for the Blue Demons to get back into this game. As he left, Freeman-Liberty showed off his passing and shooting skills to lead a 9-0 run, and give DePaul the lead once again.

With no Golden, DePaul big man Brandon Johnson took over in the paint on both ends, scoring points and grabbing rebounds. The Dawgs went cold for shooting and didn’t have an answer on either end. DePaul’s lead grew to nine, their largest of the game.

Down nine and not having an answer, the Dawgs turned to freshman Jayden Taylor and Simas Lukosius down the stretch to get them back in the game. Closing the gap, Butler turned to the press defense and made it a one possession game.

A Lukosius 3-pointer with 2 minutes remaining tied the game up at 63-63. Back and forth action down the stretch saw layups from both Taylor and Lukosius from the Dawgs and Nick Ongenda, Freeman-Liberty, and Johnson from the Blue Demons, knotting things up at 69-69.

With less than 30 seconds on the clock, Butler had the ball. With a possession looking like it was going no where late in the shot clock, Lukosius heaved up a heavily contested shot and banked it in for a 72-69 lead. A quick foul following the three by Butler didn’t allow DePaul to set up an offense and ended the game, 73-71.

Butler finished with four player in double-digit scoring. Lukosius led the Dawgs with 19 points, with Harris adding 18, Taylor adding 12, and Aaron Thompson with 11. Jones led all Blue Demons with 17 points, with Ongenda scoring 14 and Freeman-Liberty finishing with 13.

Players of the Game

The player of the game was Butler Freshman Simas Lukosius, leading all scorers with 19 points, including coming up clutch down the stretch, scoring 10 points in the final three minutes of the game, and knocking down the game winning shot.