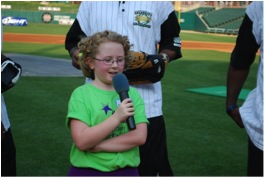 Hannah loves dancing, drawing, and animals.  This is her Riley story:

Hannah’s story began in February 2008 with a fall in gym class.  Over the next few days, Hannah began to favor her right leg.  Upon closer examination, it was discovered that her upper right thigh was swollen and an appointment to visit the family doctor was made. The doctor immediately ordered an x-ray, which revealed a large tumor. She explained that the location and characteristics of the tumor were indicative of Osteosarcoma. That afternoon, Hannah was referred to a local hospital for an MRI and CT scan.  The scans revealed that the cancer had not spread to any other parts of her body.  The following day, Hannah went to Riley Hospital for Children for a biopsy.  The biopsy confirmed Osteosarcoma.

The plan from day one was to rid Hannah’s body of cancer while attempting to save her right leg.  A week after the biopsy was performed Hannah was admitted to Riley Hospital for Children and began chemotherapy treatments.  She endured three months of chemotherapy prior to limb salvage surgery.  Hannah underwent a rare and radical surgery called a Van Ness Rotationplasty.  The surgery involved the removal of Hannah’s knee and most of her femur; the lower leg (tibia) was then rotated 180 degrees and reattached to the remaining femur bone near the hip.  Her tibia would act as her femur and her heel would replace her knee.  This procedure gives her the ability to have a functioning ‘knee’ in order for her to maintain an active lifestyle.  The Surgeon was able to successfully remove the entire tumor and achieve wide margins.  The pathology report documented the tumor response to chemo as poor (80% necrosis) and an aggressive post-operative chemotherapy treatment plan was put in place.  Hannah continued chemotherapy for several more months to eradicate any remaining microscopic cancer cells.  She ended her treatments in February 2009.

Today, Hannah is an active 9 year old and remains cancer-free.  She enjoys roller skating and swimming, but most of all she loves to DANCE!  She welcomes the opportunity to meet new friends and share her story of hope and perseverance.  Riley Hospital for Children holds a very special place in her heart.