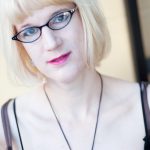 Charlie Jane Anders is the author of All the Birds in the Sky and Choir Boys, which won the Lambda Literary Award. She’s the organizer of the Writers With Drinks reading series, and she was a founding editor of io9, a website about science fiction, science, and futurism. Her stories have appeared in Asimov’s Science Fiction, The Magazine of Fantasy & Science Fiction, Tor.com, Lightspeed, Tin House, ZYZZYVA, and several anthologies. Her novelette “Six Months, Three Days” won a Hugo award.

She writes: “I was a founding editor of io9.com, where I’m probably best known for my reviews of Transformers: Revenge of the Fallen and The Last Airbender. Or my super detailed look at the making of Mork and Mindy. Or for my Game of Thrones recaps.  Or for my writing advice columns. Or my in-depth investigation of people who claim HIV doesn’t cause AIDS. Or my geeky articles about topics like the search for a cure for cancer, or how Leonard Nimoy changed everything, or how the TV show Star Blazers helped me deal with being bullied. Or just generally being an obnoxious loud-mouth.”