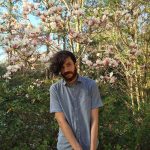 “I just feel so lucky to be able to live this life where I get to write poems and read poems and think about poems all the time. And I do think that began at Butler,” he said. “Through the friends and mentors I met at Butler who were willing to listen to me blather on and on about this or that poet or this or that poem, the friends and mentors who would often blather back at me with equal fervor. That was such a gift, remains such a gift—one I think about every day.”

Kaveh Akbar graduated the Butler MFA in 2015. In 2016 Kaveh won the Lily Foundation Grant, published a chapbook, signed a contract to publish a full-length book of poetry, and published dozens of poems in highly regarded magazines like Poetry, Tin House, Indiana Review, Field, Poetry Foundation, and Visible Binary. In 2017 his poems will appear in Ploughshares and the New Yorker. Along with Butler MFA, Kaveh hosts the Divedapper Poetry Carnival, an annual event in Indianapolis that makes poetry fun in Indianapolis. He is also the creator of Divedapper, a popular blog of conversations with the biggest names in poetry.